Interlangue is a leading agency in broadcast and conference interpreting in the South Florida area. Our company provided simultaneous interpreting services during the historic 2016 Presidential Debates between presidential candidate Hillary Clinton and now President Donald Trump for CNN en Español; this took place during CNN en Español’s English broadcast of the debates in their recording studio in Miami, Florida.

CNN en Español broadcasts to the United States of America, Latin America and Equatorial Guinea. In Canada, a number of the network’s shows are simulcast on TLN en Español; in 1999, CNN en Español launched an independent feed for Mexico.

You may watch the first 2016 Presidential Debate interpreted into Spanish by our simultaneous interpreters in full by following the links below. Our interpreters provided the Spanish interpretation for both Hillary Clinton and Donald Trump. 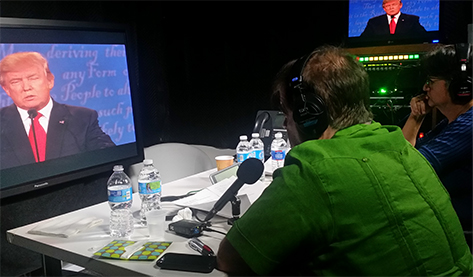 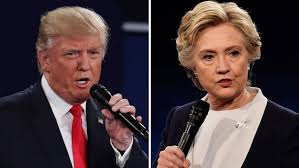 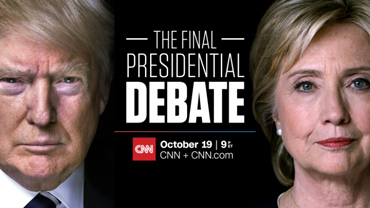 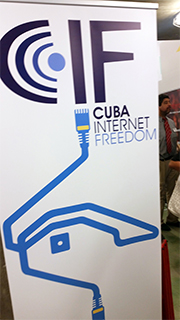 RADIO- TV MARTI/BROADCASTING BOARD OF GOVERNORS

In September 2016, Miami hosted the first ever Cuba Internet Freedom Conference (CIF); the second event took place in November 2017.  This conferences not only focused on improving digital rights and uncensored internet access for Cuba, but the topic of access to the media in Venezuela was also addressed during the 2017 event.  Interlangue provided simultaneous Spanish<> English interpreting services during both conferences.  The events were organized by the Office of Cuba Broadcasting (OCB) and were broadcasted to the island of Cuba, which has “one of the lowest internet penetration rates in the world. Recently, the United Nations declared Internet access as a basic human right, and Cuba opposed the move”

The OCB, part of the networks of the Broadcasting Board of Governors (BBG), has its headquarters in Miami, FL and oversees Radio and Television Marti, both of which provide the people of Cuba with programs through satellite television, AM radio and other means to bring objective information to all Cubans. The BBG is an “independent federal agency supervising all U.S. government-supported, civilian international media. Its mission is to inform, engage and connect people around the world in support of freedom and democracy. The BBG programming has an audience of 278 million in more than 100 countries and in 61 languages”

For access to the full article by the BBG, follow the link below.
Cuba Internet Freedom Conference – BBG.

HEARING IN THE SENATE REGARDING ATTACKS ON DIPLOMATS IN CUBA

The Subcommittee of the United States Senate for the Western Hemisphere on Transnational Crime, Civilian Security, Democracy and Human Rights held a hearing on Capitol Hill on Tuesday, January 9th,    2018, in order to discuss the possible causes of the controversial events that took place in 2016 which seriously affected the health of 24 diplomats and their families based on the island of Cuba. It is unclear whether the events were caused by some sort of sonic attack against the US embassy in Havana. The hearing was presided over by Cuban- American Senator Marco Rubio. Democratic Cuban-American senator Bob Martinez form New Jersey was amongst the highest ranking members attending the hearing.

Interlangue provided simultaneous Spanish interpreting services during the broadcast of the hearings by Marti TV.